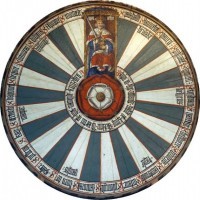 The first Round Table was formed in Norwich in 1927

The Round Table roundel or 'The Dartboard', is based on an image that hangs in the Great Hall at Winchester. It's a medieval reproduction of King Arthur’s Round Table, however, the medieval ancestry is nothing to do with us, sorry.

In actual fact, our name comes from a speech that the then, Prince of Wales made in 1927 to the British Industries Fair: “The young business and professional men of this country must get together round the table, adopt methods that have proved so sound in the past, adapt them to the changing needs of the times and wherever possible, improve them”.

This speech inspired the name, and also provided our motto: adopt, adapt, improve –  principles that remain at the heart of the organisation.

The first Round Table was formed in Norwich in 1927The founder, Louis Marchesi, was the youngest member of Norwich Rotary Club who felt there was a need for a club for the younger men of the town. His vision was for them to exchange ideas, learn from the experiences of their colleagues, and together contribute to the community life of the city.

In the following 12 months, interest was so high that the club attracted 85 members, and people around the country were starting to show an interest in establishing other clubs.

From the beginning, Round Table was a non-religious, non-political, and non-sectarian club, an ethos that still underpins the club today.

The first overseas group was formed in Copenhagen in 1936.

Round Table is now global, with members in most European countries, as well as Africa, the Middle East, India, Hong Kong, New Zealand, and the USA.